This Saturday 1 July we celebrate the feast day of Saint Oliver Plunkett, Bishop and Martyr. 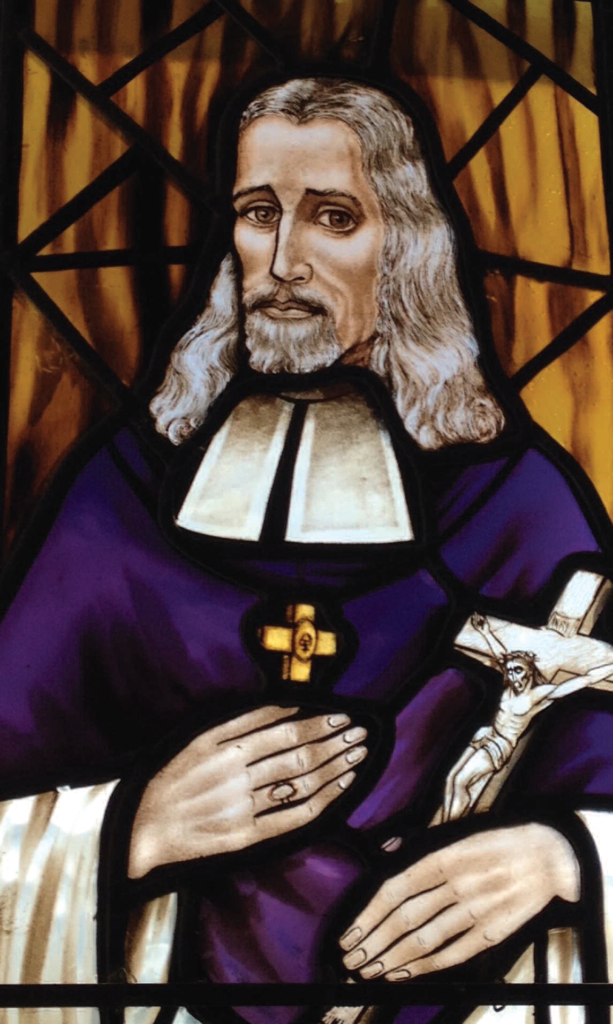 Oliver Plunkett, Catholic Archbishop of Armagh, was born 1 November 1625 at Loughcrew, near Oldcastle, Co Meath, son of John Plunkett and Thomasina Plunkett (née Dillon). He was related on his father’s side to the senior branches of the Plunketts (Lords Fingall, Dunsany, and Louth) and on his mother’s side, through cousinship, to the Earls of Roscommon and Fingall. He was tutored by his first cousin once removed, the Cistercian Patrick Plunkett, later bishop of Ardagh (1647-69) and Meath (1669-79) on whose advice he travelled to Rome. Oliver stayed in the Irish College, Via degli Ibernesi, Rome, from 1650 to 1654 (or perhaps 1656). He studied at the Jesuit university, Il Collegio Romano, and later at the Collegio di Propaganda Fide. He was ordained priest on 1 January 1654 by Anthony MacGeoghegan OFM, Bishop of Clonmacnoise. After his petition to stay in Rome he was exempted from his student oath to return on mission to Ireland. He became a chaplain with the Oratorian Fathers at San Gerolamo della Carità. Having completed further studies he was appointed professor of theology in the Collegio di Propaganda Fide. He gained the friendship of Mgr Odescalchi, who in 1676 became Pope as Innocent XI. He often assisted him in ministering in the hospital of Santo Spirito. Agent in Rome for Patrick Plunkett, Bishop of Meath, he was also nominated agent for the province of Dublin by Peter Talbot, Archbishop of Dublin.

On the death of Archbishop Edmund O’Reilly, Oliver, who had petitioned to succeed him, was appointed to the See of Armagh by Pope Clement IX despite a petition from the agent of the Armagh clergy that no Meathman should be appointed. The cleavage between the Old Irish and Anglo-Irish was still strong but on the whole he was warmly welcomed. On his way, he was ordained bishop on 1 December 1669 by Bishop D’Allamont of Ghent.

Oliver’s active ministry lasted nine years and nine months. He was a man in a hurry. He shared his compassion with his people when he returned. Although things had eased under Charles I the country had been devastated in the Cromwellian period. A few of the Anglo-Irish nobility survived. The Gaelic nobility in the north was almost no more. Oliver set out to repair a broken church, calling synods, restructuring a hierarchy, pulling together a clergy rent with dissensions, demoralised and deprived of education. He confirmed some 10,000 people, young and old, in his province, and founded two schools for the education of boys and also saw to the training of priests first in the Dundalk area and then in Drogheda. The Drogheda schools were suppressed in November 1673. Some of his priests assisted him greatly including Dean Brian McGurk and Henry Hughes, his vicar-general. Oliver ordained some 200 priests in Ireland, some at Ballybarrack, Dundalk.

An educated and disciplined clergy was one of his main pastoral desires. His pursuit of discipline caused resentment among some clergy. He met a group of Tyrone tories in September 1670 and arranged pardons and a safe conduct for fifteen of them to go abroad. He developed a friendly relationship with Protestant leaders including Archbishop James Margetson of Armagh and First Viscount Charlemont and this helped him to pursue his pastoral work discreetly. He made a pastoral visit to six dioceses.

Archbishop Oliver Plunkett and Archbishop Peter Talbot engaged in an unseemly dispute over the primatial rights of Armagh and Dublin. Archbishop Plunkett played an active part in solving disputes in various dioceses and reported on them to Rome. Plunkett wrote a short book in English Jus rimatiale (Dublin, 1672) a defence of Armagh’s primacy and that was answered by Talbot’s book in Latin, Primatus Dublinensis (Lille, 1674). However the archbishops were reconciled by Bishop John O’Molony of Killaloe.

In the spring of 1673 he spent six weeks in Connacht. Then he had to face political change. Resentment had grown in the English parliament against the king’s tolerance of Catholics. A wave of persecution followed. Archbishop Talbot was banished. Bishops and priests went underground. Plunkett and his friend John Brenan, who had returned to Ireland, sought refuge in south Armagh. There was a famine in the north in 1674 in which 400 Catholics died of hunger. Oliver wrote: ‘You can see hundreds and hundreds of starved skeletons walking the roads.’ He did his best to help. He lived a life of continuous sacrifice.

The archbishop continued to write to Rome regarding the appointment of bishops. He held synods of his own clergy every two years and finally a provincial synod at Ardpatrick near Louth village in August 1678, which issued twenty-six decrees directed at the sanctification of the faithful, the ending of clerical scandals, and restoration of church discipline. He continued to report to Rome on the situation in various dioceses. 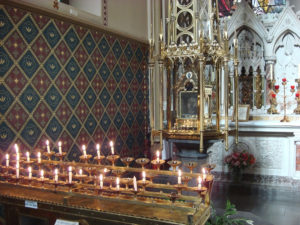 After the alleged discovery of a ‘popish plot’ in 1678 the bishops went into hiding again. In October 1679 Oliver risked a visit to Dublin to visit Bishop Plunkett of Meath, who was ill and died on 18 November. On 21 October 1679 the English privy council instructed the lord lieutenant, the Duke of Ormond, to arrest Oliver and Bishop Patrick Tyrrell of Clogher. A letter had been given to the Duke of York in Brussels accusing Col. John Fitzpatrick (Plunkett’s benefactor, and brother-in-law of Ormond) and the two bishops of plotting to bring a French army to Ireland. Oliver was arrested on 6 December, imprisoned in Dublin and tried in Dundalk (23 July 1680) on two bills of indictment, one for treason and one for exercising papal jurisdiction. When Edmund Murphy, a priest whom he had suspended, failed to appear as a witness, the trial broke down. But on 6 October Oliver was sent for trial to London and was transferred to Newgate prison. In April 1681 the Westminster grand jury found a true bill against him and returned him for trial. On 3 May he was arraigned for high treason before the king’s bench and given five weeks to bring his witnesses from Ireland. On 8 June, before their arrival, he was tried for high treason and found guilty on perjured evidence. Lay and priest witnesses, including Florence MacMoyer and the hostile friar John MacMoyer (he later repented), were weak and unimpressive. Beyond protesting against being tried in England, Oliver made little defence. In prison he was attended by his faithful servant and friend for eleven years, James MacKenna, and by Dom Maurus Corker OSB, a fellow prisoner. His last moving speech was printed in London. His courage, forbearance and forgiveness during his imprisonment revealed his saintly nature. He was executed at Tyburn on 11 July 1681. It was probably during his imprisonment that Garret Murphy, a Dublin portraitist, drew the sketch on which later paintings of him are based.

Oliver was beatified by Benedict XV (23 May 1920) and canonised by Paul VI (12 October 1975). His relics are venerated in St Peter’s Church, Drogheda (where his head is kept), Downside Abbey, England, and Lampsringe, Germany.