Feast of Feasts – Saint Francis and the Crib

“The crib is our common home in miniature, a place where God, tiny and poor, dwells with creation in love, harmony and peace. How powerfully that truth was rediscovered and shared in Greccio that night Saint Francis made the worlds’ first Christmas crib.”

In our Christmas issue of Intercom, Father Liam Kelly OFM told us the story of the the first Christmas crib. 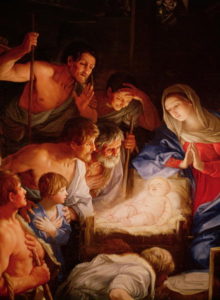 Feast of Feasts – Saint Francis and the Crib

Thomas of Celano, the earliest biographer of St Francis of Assisi wrote: ‘the birthday of the Child Jesus Francis observed with inexpressible eagerness over all other feasts, saying that it was the feast of feasts, on which God, having become a tiny infant, clung to human breasts’ (2 Celano, 199).

The love of God, who becomes so tiny and poor for our sake, inspired Saint Francis to make a living crib in the little Italian town of Greccio, about the year 1223. That Christmas, Saint Francis arranged with a devout nobleman of the town to have an ox and an ass brought to a stable. The manger was supplied with hay and the animals were led inside, taking their places in the Nativity scene. On that Christmas night the brothers were called from various places and the people of the countryside and the local villages came holding candles and torches so as to ‘light up that night that has lighted up all the days and years with its gleaming star’ (1 Celano, 85). The scene captured the imagination of those who were present and Celano records: ‘There simplicity was honoured, poverty was exalted, humility was commended and Greccio was made, as it were, a new Bethlehem! The night was lighted up like the day, and it delighted men and beasts … the woods rang with the voices of the crowd and the rocks made answer to their jubilation. The brothers sang, paying their debt of praise to the Lord, and the whole night resounded with their rejoicing’ (Ibid).

From Celano’s evocative Life of Saint Francis the origins of the Christmas crib can be traced. It is obvious that Saint Francis had a flair for the dramatic gesture! Long before his conversion, it was noted, he had the habit of sewing odd pieces of old cloth onto his expensive and fashionable clothes. Both in his style of dress and in bold and creative gestures, Francis usually left an impression on his companions. He could be provocative, playful and theatrical. When the ‘feast of feasts’ approached, St Francis helped the people of Greccio to hear again, or perhaps for the first time, the Good News of Christmas, which is itself a pledge of God’s unceasing love for all creation; God has ‘pitched his tent’ among us and flooded the world with light and grace and hope.

Eight centuries later, Pope Francis has managed to catch the attention of many around the globe with gestures that teach and teachings that demand gestures and new actions. Early in his pontificate his embrace of Vinicio Riva, an Italian man badly disfigured from a rare genetic disease, communicated, along with other powerful gestures, the Christian imperative of going to the margins, seeking out and standing with the vulnerable and the marginalized. Gestures have the means of teaching profound spiritual truths. Pope Francis’ Encyclical Letter, Laudato Si’, takes up the theme of caring for our common home and it is significant that Saint Francis ensured that the flora (represented by the hay) and fauna (represented by the ox and the ass) had a part to play in the Nativity scene.

The Word made flesh is also the Word through whom everything, all created things, were made. The crib is our common home in miniature, a place where God, tiny and poor, dwells with creation in love, harmony and peace. How powerfully that truth was rediscovered and shared in Greccio the night Saint Francis made the worlds’ first Christmas crib. In smaller and less dramatic forms the crib has stayed with us and it finds a place in our homes, schools and hospitals in the run up to Christmas each year. It remains a much loved window into the ‘feast of feasts’, reminding us of the divine love which stoops down and makes all creation new.