FR CHRIS HAYDEN: Fr David Murphy, we’re sitting here in the chaplain’s house in Liam Mellows Barracks, Renmore, Galway, where you’re stationed at present.1 What’s your role here?
FR DAVID MURPHY: I’m here as a locum chaplain for the Defence Forces. I cover for chaplains who are stationed overseas, until their return. At the moment, I’m here with the First Battalion for six months, until the resident chaplain returns from overseas. When he returns, I’m scheduled to go to Finner Camp in Co Donegal, while the resident chaplain there goes overseas.

CH: What’s particularly interesting about you, David, is that you’re on your second military career. Tell us about that.
DM: I first joined the Army as a recruit on June 21st, 1979, at eighteen years of age. I started in Kilkenny, and I moved to the Curragh in January 1981, to do a Corporal’s course. When I completed that, I was promoted to the rank of Corporal in May and returned to Kilkenny. Not long after that, I saw a notice inviting people 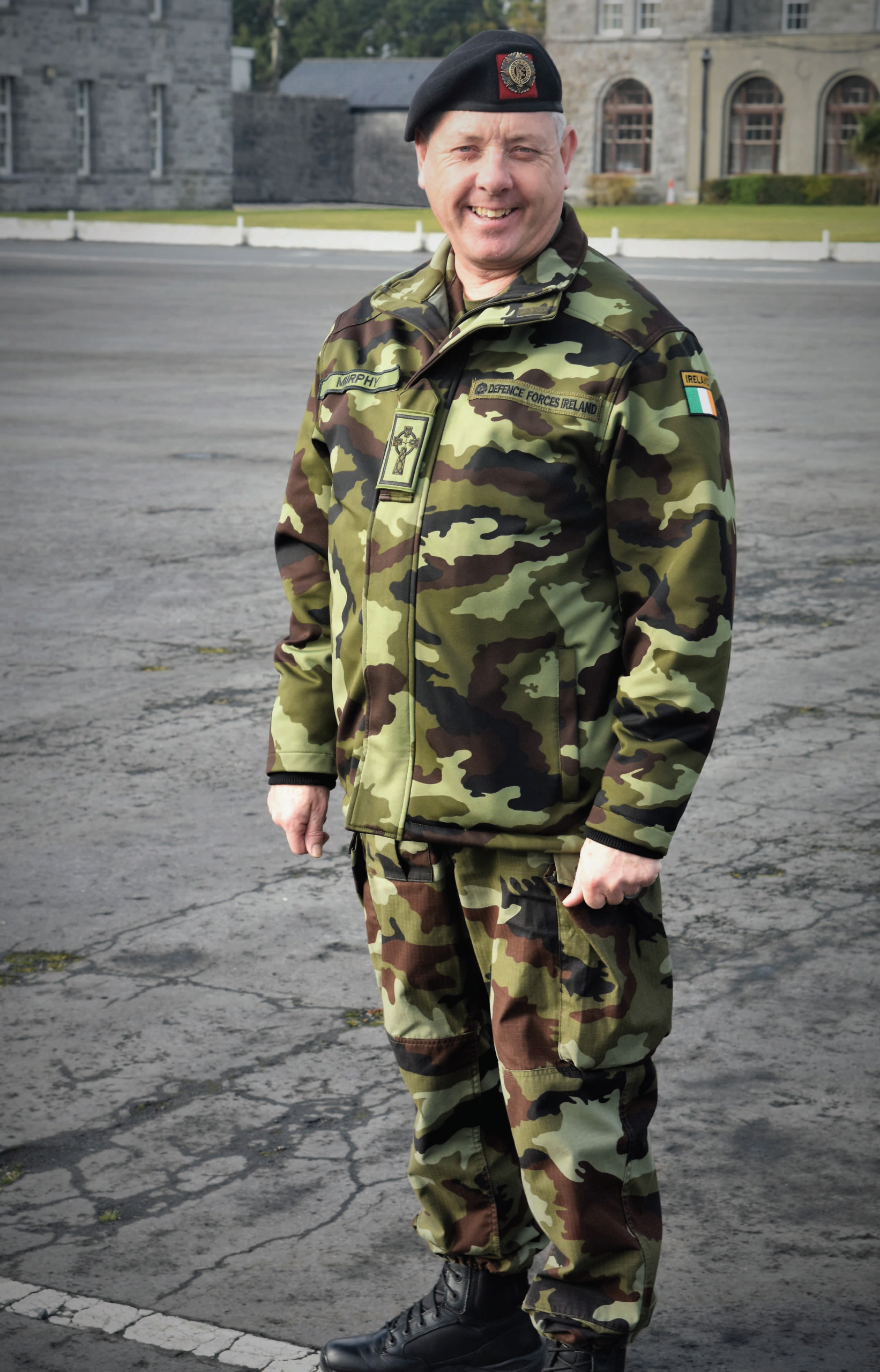 I spent six years in the seminary, and I was ordained in 1991 for the Diocese of Ferns. I was assigned as curate in Kilrane, Rosslare Harbour, from 1991 to 1998, and then transferred to the parish of Taghmon, where I was curate for almost eighteen years, until 2016, when I read that there was a vacancy for the position of Army Chaplain. I applied and was accepted, and I was sent to Galway as a chaplain in October 2016. Since then, I’ve been a fulltime military chaplain with responsibility for various barracks where the resident chaplain is posted overseas.

CH: What made you decide to go back into the Army?
DM: When I was ordained a priest, I hoped to go back to the Army eventually, as a chaplain. I had that in my mind all along. I had got on well in the Army, I received an education there, I found it to be a great network of support and camaraderie. I wanted to go back and give something to the serving soldier. I felt that given my six years as a soldier, I could relate to soldiers as a chaplain. The wheel has turned full circle: I was a soldier; now I’m a chaplain to soldiers.

CH: You returned to the Army on the silver jubilee of your ordination: you’d just celebrated twenty-five years of priesthood that summer.
DM: Yes – a great way to celebrate my silver jubilee! I’m very content in my role as Army chaplain. The chaplain’s role is to look after the spiritual needs and pastoral care of the soldiers. In the barracks, we’re also a visible presence, available to meet soldiers on request, and perhaps to help them get through a difficult patch. As chaplains, we relate equally to all ranks. We call recruits and cadets by their first names, which can be an important way of reaching out, of encouraging them.

CH: Am I right in thinking that as a chaplain, you don’t have a designated rank yourself, but relate on equal terms with whoever you happen to be speaking to, whatever their rank?
DM: That’s correct – Irish Army chaplains don’t hold a rank, but assume the rank of whoever they are talking to.

CH: What’s your typical day like?
DM: I’m up by 7.30. Mass is at 8.00, followed by breakfast, after which there is parade out on the square. I then visit the troops outside or in the offices. I always go into the dining hall at lunch time; it’s a good way of meeting the soldiers and getting to have a chat with them. In the afternoon, I generally move around the barracks, or spend some time in the chaplain’s house, where I’m available for anyone who calls.

CH: I know from our seminary days that you have always been an active and fit man, into exercise and the outdoors. But you were fifty-five when you came back into the Army as a chaplain. Has it been a big challenge from a physical point of view?
DM: Coming back into the Army, I was reasonably fit, but I’m surrounded by soldiers who are thirty and more years younger than I am, and I wouldn’t be keeping up with them when they’re out running! There can be a physical challenge, but mentally, emotionally and spiritually, I’ve been able to take it in my stride, and I’ve found it easy to settle back into army life. Being a former army man has been a huge advantage to me. Also, from the point of view of my ministry, when I’m chatting to soldiers and I tell them about my own experience as a soldier, I can often see them relaxing straight away and being more inclined to talk openly. My military past is a great ice-breaker for my present chaplaincy role.

CH: I’m mindful of another way in which the wheel has turned full circle. When you were a very young man, you were selected to make a presentation to Pope John Paul II, on his visit to Ireland in 1979.
DM: I was just a recruit in ’79, when I was selected by the A

rmy to present an oak sapling to Pope John Paul II at the youth Mass in Galway on September 30th. I was stationed in the barracks in Kilkenny, and a local priest, the youth director for the local diocese of Ossory, came to the barracks looking for someone to represent the diocese. He asked to have a solider meet the Pope, as he felt that the uniform would stand out. The Commanding Officer asked me if I’d like to go. I said that there were sure to be other soldiers who had been around longer and might be better choices. But they were looking for a very young recruit, so I agreed, and I had the honour and privilege of meeting Pope John Paul II in Galway. I had only joined the Army on June 21st, and at the end of September, there I was, in uniform, meeting the Pope! Looking back, it was certainly a factor influencing my decision to become a priest.

CH: How big a factor? And what other factors were there?
DM: Yes, meeting the Pope was a big factor in my eventual decision to go for the priesthood. Another factor was being in the Army and being allowed to continue my education and take my Leaving Cert. Overall, being in the Army, meeting all sorts of different people, taking the Leaving Cert, meeting the Pope, along with having a deep sense of a calling – these were all factors that led me to the priesthood.

CH: When I look at that photo taken as you presented the oak sapling to Pope – now Saint – John Paul II, he seemed to greet you with particular warmth. You weren’t just one more person lined up…
DM: Yes, there was warmth in his handshake, and he also looked me straight in the eye. He asked me how long I’d been in the Army. When I answered, ‘three months,’ he told me that he was in the Polish Army himself, when he was young, and he wished me the best of luck in the Irish Army.

CH: There’s been a lot of water under the bridge in the years since, and not just on a personal level. You and I were ordained in ’91, little suspecting that as far as the Irish Church was concerned, the wheels would begin to fall off the trolley within a couple of years, with the endless scandals and revelations that we’ve lived through for a couple of decades now. How does all that make you feel, here and now, as priest? Here you are, marching around the barracks – quite literally marching at times! – how do you find people’s attitude to you? Most of the soldiers you’re working with are youngsters. What’s their attitude?
DM: Sometimes, for example, you’ll hear them say, ‘Why should I go to Mass? Look at all that’s happened… the abuse scandals… the Vatican is full of wealth…’ and so on. That can be challenging, but my job is to listen, and I let them know that if they need anything, I’m here for them. The heart of my chaplaincy work is simply being here, ‘marching around,’ being available. I chat a lot to people individually and informally. Most of them accept me and what I do, and in any cas 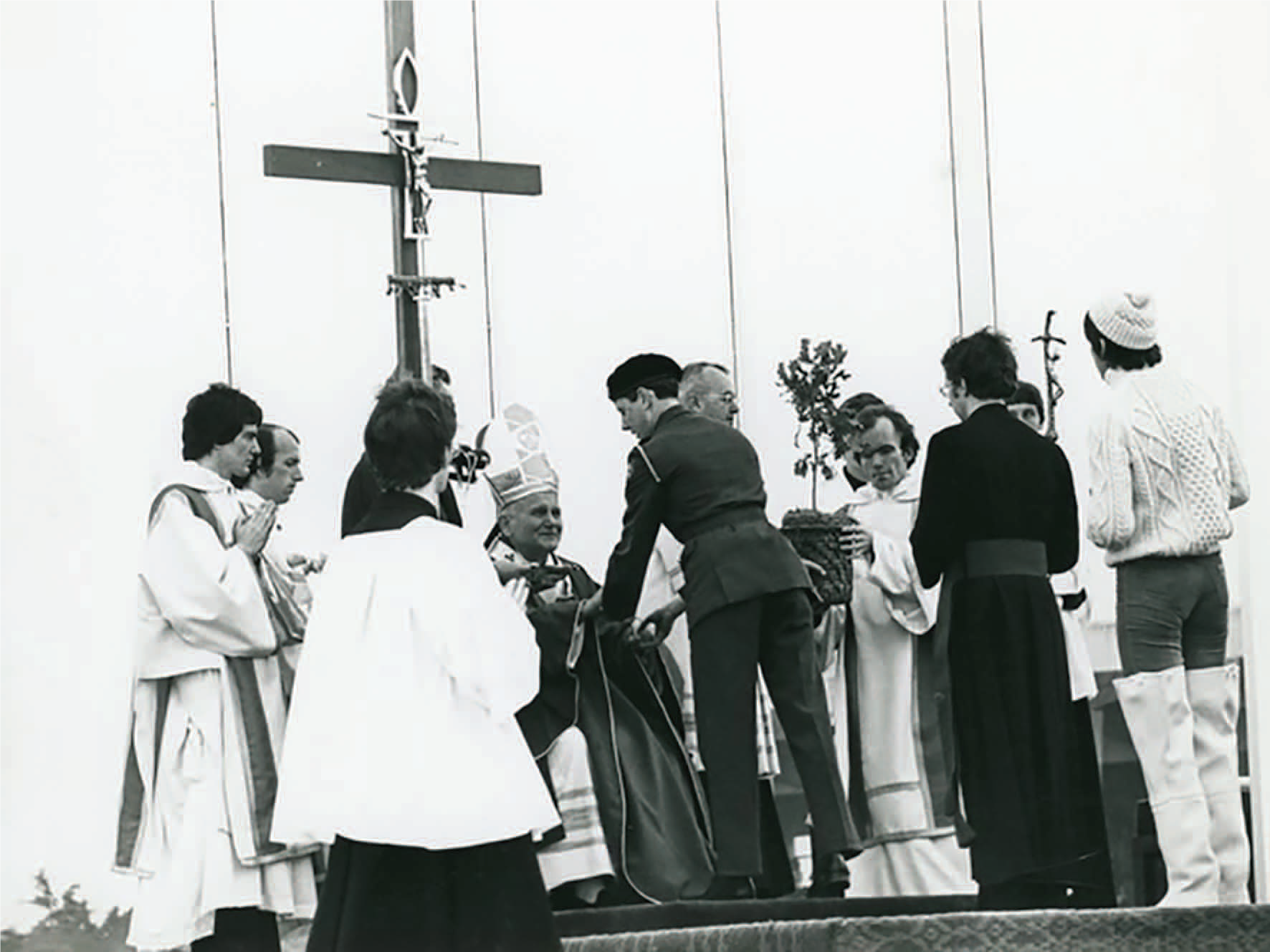 e, I just keep going with confidence. This approach was borne out for me back in parish, at times when the abuse scandals were very much in people’s minds. Morale was low at times; it was easy to feel that all priests were being tarred with one brush. I remember one Saturday evening, standing outside the Church after Mass. I was feeling a bit down about things, but some people said to me, as they were leaving the church: ‘You’re doing a good job, Father; keep the chin up.’ Ever since then, my approach has been just to get on with things, to do my best and keep up my morale, and be honest and open with people. I do the same now, in the Army. By and large, the chaplain is held in high regard by soldiers, and this applies especially overseas, given the challenges and pressures that can go with being stationed far from home, in a difficult, sometimes dangerous environment. There are many practical ways of reaching out to soldiers also. When the family member of a soldier dies, I always do my best to attend the funeral. Just today, a solider made a point of thanking me for coming out to his father’s wake and funeral Mass, and of telling me how much that meant to his family. I also do marriages and the baptisms of soldiers’ children when I’m asked.

CH: What is the single biggest challenge for you in this, your second army career?
DM: I must admit that at the moment I’m managing to take things in my stride and enjoying the work. As I said earlier, becoming an army chaplain had been my goal for a long time, and now that it’s come about, I’m very contented. There are day-to-day challenges, of course, but nothing I haven’t been able to take in my stride. I look forward to meeting troops, and as a locum chaplain I look forward to moving to a different barracks every few months. The work is keeping me on my toes and keeping me young at heart. It’s very different to parish work. I have very little administration to do; I don’t sit on Boards of Management. It’s a very personal form of ministry, with ongoing personal contact with lots of different people, in various different settings. Something I particularly enjoy is working with recruits who have just come into the Army. The chaplain will meet with them a few times during their training, and they see the chaplain as a friendly face. Their training is a serious time, and the people involved in it are serious with them, making sure that they toe the line. This is a demanding time for the recruits, and they appreciate the different, friendlier role of the chaplain. So yes, overall, I’m very contented in my role as military chaplain, and enjoying this second part of my military career!

NOTE
1 Since this interview took place, Fr David Murphy has served as locum chaplain at Finner Camp in Co Donegel. He is currently serving with Irish troops on peacekeeping mission in Syria.