The first ever pilgrimage from Knock Shrine to New York departed this week on a special chartered flight from Ireland West Airport to JFK International.

As part of this historic seven-day pilgrimage, the remains of John Curry, the youngest Knock Apparition witness, will be reinterred at Saint Patrick’s Old Cathedral, New York, on Saturday 13 May, where a special requiem Mass will be celebrated by Cardinal Timothy Dolan, Archbishop of New York.

In our May issue, Knock Shrine’s Maria Hunt told us the story of Knock’s youngest witness. Read the full article below, or click here to download or print the story. 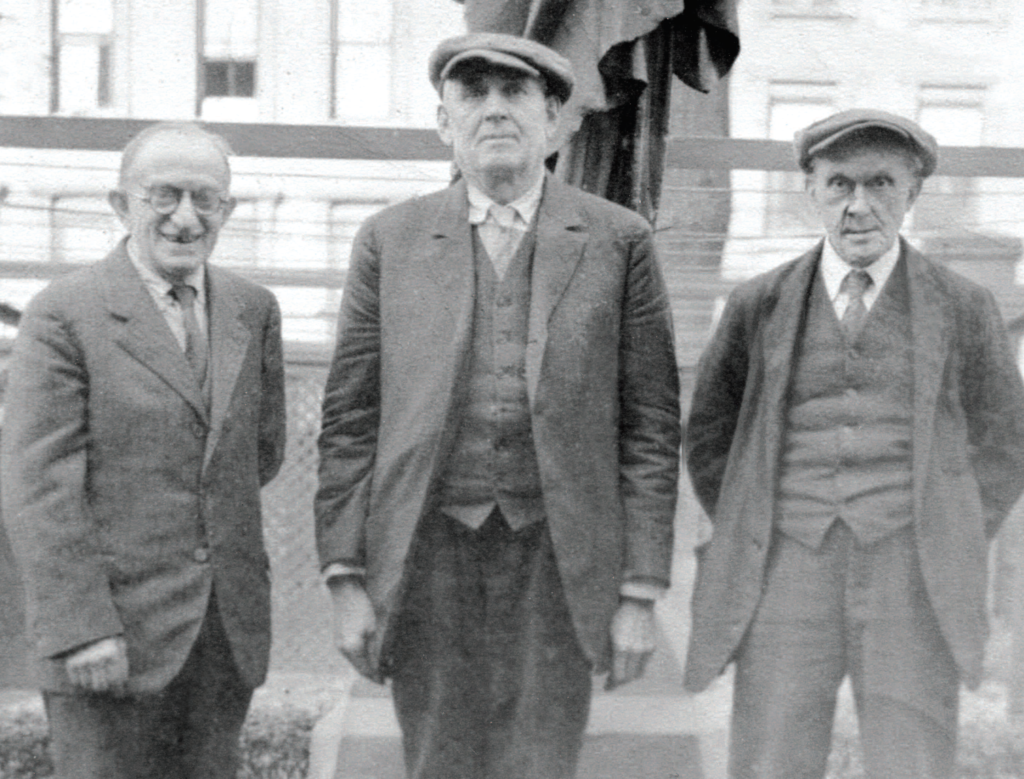 John Curry (centre) with Patrick Hill, another of the Knock visionaries, with one of their friends in new York

It is not every day that one can embark on a direct flight from Knock to New York, however on Monday, 8 May 2017, for the first time in history, Knock Shrine will lead a pilgrimage from Ireland West Airport Knock direct to JFK International. This will be a special and historically significant seven-day trip to have the remains of the youngest Knock Apparition witness, John Curry, reinterred at Old St Patrick’s Cathedral, New York, on Saturday, 13 May, where a special Requiem Mass will be celebrated by His Eminence Cardinal Dolan. It is a great honour bestowed by the Archbishop of New York for Knock Shrine and for John Curry’s family to have his remains transferred to the historic centre of the Irish.

John Curry was a native of Knock, who was just five years old when he, along with fourteen others, witnessed the miraculous phenomenon at the gable wall of Knock Parish Church on 21 August 1879. As a young man, he went to New York where he remained until his death in 1943. He lived out his final years with the Little Sisters of the Poor and is currently buried at Pine Lawn Cemetery, Long Island.

Renewal of Knock Shrine – International Pilgrimage
This pilgrimage is a significant development, not only for the Shrine in recognising John Curry, but also in endeavouring to build long-term relationships with the Church and diaspora in the States. It is also an enormous boost to Ireland West Airport, having successfully welcomed pilgrimages from New York in 2015 and Boston in 2016. This pilgrimage further highlights the possibilities of pilgrimage growth for Ireland’s National Marian Shrine. 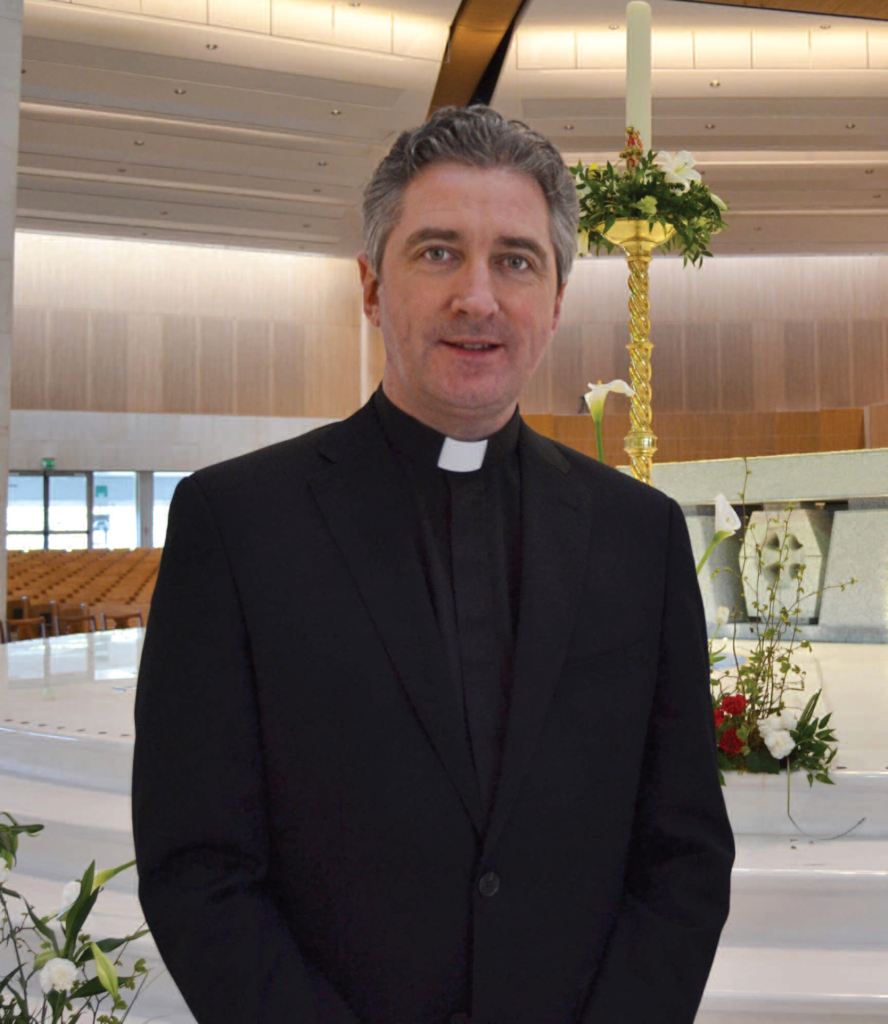 Speaking about the pilgrimage, Fr Richard Gibbons said, ‘It is a hugely significant step for the people of Knock and the airport. We will have the honour of celebrating the Requiem Mass with Cardinal Dolan. I like to think of the re-interment as us, the people of Knock, bringing John Curry home. Rather than having the ability to bring him back home to Knock, he will be brought to Old St Patrick’s Cathedral, which will give him the recognition he deserves as a witness to the Apparition and as someone who is so central to the rich history of the Shrine.’

The pilgrimage to New York is just one aspect of the transformative development and renewal of Knock Shrine under the ambitious ‘Witness to Hope’ plan, which has incorporated the refurbishment of the iconic Basilica at Knock; a brand new offering of faith events, including lively day retreats, workshops, concerts and special ceremonies; and a number of high-profile guest speakers throughout the year. This is all a part of a vision for Knock and the desire to offer pilgrims and parishioners something new, interactive and engaging.

At the centre of the great plan are the pilgrims and how best to meet their needs, both practically and spiritually. Fr Richard Gibbons continued, ‘It’s certainly been a challenge for me, but one that I welcomed because I have such a strong sense that Knock is a very special and unique place. Aside from tending to the needs of our pilgrims and parishioners, I feel that an important aspect of my role is to go out into the world and bring the message of Knock abroad and invite people to experience this wonderful place.’ 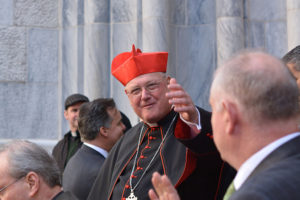 Knock Shrine began to forge new connections in 2015 when the first organised pilgrimage from New York was welcomed into Knock Airport. The group of 170 were accompanied by His Eminence Cardinal Dolan and took part in celebrations to mark the 130 year anniversary of the Apparition. This was followed last year by the visit of Cardinal Sean O’Malley and a group from the Archdiocese of Boston. The visits were key in connecting with the Irish Diaspora abroad with the hope of inspiring many others to make the journey home to experience a pilgrimage at Knock.

New York Connections to Knock’s Youngest Witness
Anyone who is familiar with the story of Knock will know that there were fifteen official witness to the Knock Apparition, all of whom were ordinary people from the village and local area. Most of the witnesses lived out the remainder of their lives in Knock and ten of them are buried in the old cemetery there.

As a witness, John Curry is especially interesting as he was the youngest of the group, aged just five years when the Apparition occurred in 1879. His testimony was given during the Commission of Enquiry which was held in October that year. Due to his height, it was stated that during the Apparition he was held on the shoulders of his cousin, Patrick Hill so that he could see the figures. He described, in an innocent and child-like manner, the ‘bright lights’, and the beautiful images of the Blessed Virgin and St Joseph. One can imagine the impact that an event such as this would have on a young child.

Later, as a young man he, like many others at the time, immigrated to America in search of work. He worked for many years as a labourer and later as an attendant in the City Hospital on Welfare Island, New York. In later life, when his health began to fail he went to live with the Little Sisters of the Poor on Long Island. He was described as a quiet, unassuming man who served Mass every day for the Sisters. It was not until shortly before the second Commission of Enquiry in 1936 that it became known to them that he was one of the witnesses to the Apparition at Knock.

In a letter to Fr Dan Corcoran, Curate of Knock Parish in 1936, he wrote, ‘The night of 21 August 1879, I remember it as well as I do last night’, and goes on to describe in detail the Apparition as he witnessed it.

At the second Commission of Enquiry John Curry was interviewed by a special tribunal which was established in New York. During the lengthy interview he described seeing Our Lady, St Joseph and St John the Evangelist, along with a Lamb and Cross on an altar with Angels: ‘It appeared to me that they [the figures] were alive, but they didn’t speak. One of the women there, Bridget Trench, kissed the Blessed Virgin’s feet and tried to put her arms around the feet but there was nothing there but the picture. I saw her do that. The figures were life-size and I will remember them till I go to my grave.’

He was remembered fondly by those at the home as a man of strong faith, serving Mass every day without fail until shortly before his death. When asked in later years about the Apparition he would tell his story and his memories of growing up in Knock and of serving Mass for Archdeacon Cavanagh whom he remembered well. He told the Sisters that the Blessed Mother never refused him anything that he asked for. His words may well be remembered on 13 May at Old St Patrick’s, a perfectly providential location as the historic centre of the Irish where he will be laid to rest. The Mass will take place at 11am followed by a special Mass of Thanksgiving the following day on Sunday, 14 May at 10.15 – in New York’s St Patrick’s Cathedral prior to departure later in the afternoon.