31 October 2017 marks 500 years since Martin Luther posted his 95 Theses on a church door in Wittenberg, Germany­ – the start of the Reformation movement. From our November issue, Bishop Brendan Leahy, Bishop of Limerick, writes on Luther, God and Church Renewal. Click here to download or print a pdf of the article. 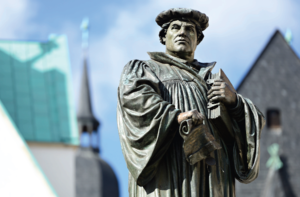 31 October 2017 is an important symbolic date as it marks the 500th anniversary of the beginning of the Reformation. It is commonly believed that on that day five hundred years ago, the Augustinian monk and Scripture professor, Martin Luther, posted his 95 Theses on the chapel door at the Castle in Wittenberg. Today, scholars doubt he actually did that. It’s more likely he sent them to Archbishop Albrecht von Brandenburg and distributed them to fellow academics, as was typical of the way of debating at the time. He certainly didn’t intend starting a new church.

Now, five hundred years later, while not celebrating the beginning of the Reformation, nevertheless we need to commemorate it. After all, Pope Francis went to Lund, Sweden, last October to begin the “commemoration”. Yes, the outcomes of the Reformation were tragic in many ways. And yet, it also marked a new chapter in the Church of Christ’s journey, one that led, not least, to a new appreciation for the Word of God, a new focus on personal experience, and a greater awareness of the need to link spirituality, theology and pastoral ministry.

So, on or around 31 October this year, it is good for Catholics to pause and reflect on the Reformation. It has had such a lasting impact not only on the Church but on society and politics in the whole Western world. Though the Reforming influences in Ireland were linked more to Henry VIII and Thomas Cranmer, John Calvin and John Knox, John Wesley and George Fox, nevertheless Martin Luther’s Reformation is significant for all of us.

In recalling Martin Luther, Catholics get a chance to correct some of the bad images that we inherited about him. We appreciate today that the era in which he was living was extremely complex, socially, politically and religiously. It is also acknowledged today that for many centuries our view of Luther was shaped by the commentaries of Johannes Cochaleus, a contemporary opponent of Luther. In the heat of the polemics of the time, Cochaleus characterized Luther “as an apostatized monk, a destroyer of Christendom, a corrupter of morals, and a heretic.” Today there is a new appreciation of what Luther was aiming to do.

We know that Luther had his defects of character. His writings about the Jews were terrible. He was polemical and could have entered more into dialogue, but then too so could many on the Catholic side. Despite limitations, however, it is important to recall that Martin Luther’s aim was to renew the Church, not divide her. And he wanted to do so from the perspective of faith and the gospel.

Today the Catholic Church is focussing again on reform, so it is helpful to look at what Luther said, much of which was eventually echoed in the Second Vatican Council. This short article cannot attempt to summarise Luther.[1] It is good, however, to focus briefly on what grounded the pastoral and spiritual experience of the Reformer. As Pope Francis reminds us, there is value in learning from others, perceiving how the Holy Spirit is at work in their experience which may be very different to our own. 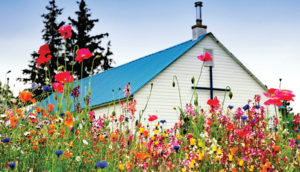 At the heart of Luther’s reforming project was a new experience of God. The hell-like terror he experienced before a perceived judgemental God was typical of his era that had suffered a terrible plague decimating Europe. The pastoral situation was one of fear. Many were attempting to construct religious devotions to appease God. This led to accumulating indulgences, a multiplication of private masses and penances of all sorts offered for the souls in purgatory. Added to that, theology had become spiritually bankrupt. Luther’s question was fundamental: how can I find a gracious, merciful God? He turned towards subjective experience. In truth, his question is one many people today, too, have deep within them, even if it is not adverted to.

Luther’s big discovery is that God is not just transcendent, almighty and all-powerful but also the God who “emptied” himself and took on our human nature to the point of identifying with our sufferings and pain. In Jesus Crucified, God is found where we least expect him. He looks on us in our incapacities, makes himself cursed, and offers us a new, flourishing life. He doesn’t condemn; he saves.

When Dr Margot Kaessmann, the Reformation Ambassador of the Evangelical Church in Germany, visited Ireland a few years ago, she illustrated Luther’s understanding with a little story. It ran: A church minister had a wonderful apple tree. Children were continuously stealing the apples. So, the minister rammed a sign into the ground: “God sees everything!” The children wrote on it: “Yes, but God does not tell tales!”. The point being that the image of God Luther discovers is of a God who shows us the pathway to life rather than condemnation. Yes, we are accountable to God, but he comes to our aid lifting us out of the quagmire of our helplessness.

Luther diagnosed the central issue of the human condition in terms of what he called an “inward curvature” of selfishness. We are always turned in on ourselves, absorbed with ourselves in one way or another. But just as the sun doesn’t shine for itself and trees don’t bear fruit just for themselves, we need to be helped to exodus from ourselves, because to live outside ourselves is our calling.

Learning from the gospel and the writings of St Paul, Luther emphasises that it is only in handing ourselves over in faith to Christ Crucified that we let God’s power come and live in us. The Crucified Christ makes our negative situation his own and gives us instead his virtue and new life of love. In other words, for Luther, we are nothing; we need to let God shape us in Christ. That’s why he was against developing devotional practices that seemed to him like Pelagian attempts to construct our own salvation. 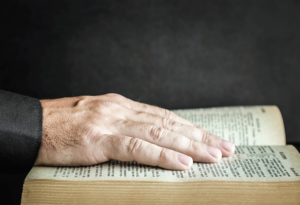 Once a person has a very personal faith experience of God in Christ Crucified, then, it was clear for Luther, the fruit of this cannot but be good works and outreach to one’s neighbour. Writing on 8 April, 1516 to one of his fellow Augustinians, George Spenlein, he commented that just as Christ “has received you and… has made your sins his own and has made his righteousness yours”, then, “you ought… to receive your… brothers, patiently help them, make their sins yours, and, if you have any goodness, let it be theirs.”

In his 1520 book On the Freedom of the Christian, n. 27, he writes, “And as our heavenly Father has freely helped us in Christ, so ought we freely to help our neighbour…, and each should become to (one an-) other a sort of Christ, so that we may be mutually Christs, and that the same Christ may be in all of us; that is, that we may be truly Christians.” And he concludes that “a Christian man does not live in himself, but in Christ, and in his neighbour, or else he is no Christian; in Christ by faith, in his neighbour by love. By faith he is carried upwards above himself to God, and by love he sinks back below himself to his neighbour, still always abiding in God and His love.”

Preaching the gospel and administration of the sacraments for Luther was not about promoting a self-perfection or holiness according to our own canons, but of encouraging acceptance of the new life given to us by God. In Christ, we are gifted creatures, not self-absorbed creators. And in Christ we are re-created as a gift for one another.

[1] For an excellent resource available on-line, see the document produced in 2013 by the Catholic-Lutheran Dialogue, From Conflict to Communion: Lutheran-Catholic Common
Commemoration of the Reformation in 2017.