Today we celebrate the feast day of Saint Patrick, our Patron Saint. From our April issue, Father Dermot Connolly of Africa Magazine reflects on the life of Saint Patrick, trafficked into Ireland a slave, and the slavery and human trafficking that persists in today’s world. Read his full article below.

Taken – A Slavery that Remains 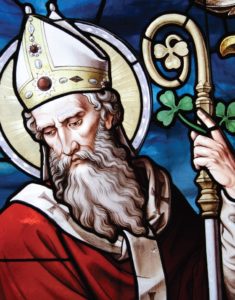 Saint Patrick was only fifteen years old when he was trafficked into slavery in Ireland; at least six years passed before he managed to escape back to his home in Britain. It left its mark on him: years later, after he had returned to Ireland, when some of his own recently baptised young people were kidnapped, and some were murdered, he was deeply angered: he wrote to the slave-traders, ‘You hand over members of Christ into what could be called a brothel.’ In our own times, it is still the fate of many who have been taken and enslaved. Patrick was accusing a slave-raider named Coroticus, who operated from somewhere on the west coast of Britain.

The young Patrick’s own captors had come from Ireland, from the ‘heathen peoples’ – now as an adult and a bishop it seems he has come up against slavers who are nominally Christian. What is he to do? He cannot take up arms against them, but he can carry the battle to their home base and try to isolate them – especially if the Church leaders and Christian communities in Britain support him in this.

As they profess to be Christian, Patrick writes what is a formal Letter of Excommunication against Coroticus and his soldiers: so long as they refuse to repent and set their victims free, it is not permitted ‘to court the favour of such people, to take food or drink with them, or even to accept their alms.’ They have committed ‘murder against the brothers of the Lord.’

This letter is not part of any secret negotiations with a slave-trading criminal; these are forthright and public words that ‘should be read before all the communities and even in the presence of Coroticus himself.’ Naming and shaming! Who knows – they may be brought back to their senses, and to forgiveness? ‘And that they may free the baptised women prisoners whom they have already captured.’

Patrick’s grief and his great-heartedness run together through this letter: ‘I do not know for whom I am to grieve the more; whether for those who were killed, for those whom they captured, or those whom the devil has deeply ensnared.’ He feels a duty of care not only to his lost sons and daughters, but even to his enemies who ‘are estranged from me and from Christ my God, whose ambassador I am.’

Manuscript copies of Patrick’s Letter to the Soldiers of Coroticus (and of Patrick’s other extant writing, his Confession) remain to our own times, and are studied by scholars such as Bishop Joseph Duffy, whose translation and learning I am gratefully using.

What also remains is slavery itself, and who are most likely to be taken: children, women, the frightened, the foolish, the desperate, the despised. I wonder if this is what Patrick has in mind when he writes, ‘We have been treated like aliens … They think it a matter of contempt that we are Irish.’ He has identified with the Irish he had come to serve. The splendid, heroic people who work against slavery in our own days would recognise what he was doing.

We use cookies to ensure that we give you the best experience on our website. If you continue to use this site we will assume that you are happy with it.Ok