The Making and the Meaning of a Statue: The Martyrdom of St Oliver Plunkett I paid a visit to sculptor Dony MacManus recently, to view a work-in-progress that has a close connection with Intercom: a dramatic bronze statue of St Oliver Plunkett in the final moments of his earthly life. The statue, which will be placed in Armagh Cathedral, is due to be unveiled on 9 July, the 350th anniversary of St Oliver’s appointment as Archbishop of Armagh, and the artist was happy to elaborate on the role played by this magazine in its commissioning. A few months back, I interviewed Dony for the December/ January issue of Intercom. Archbishop Eamon Martin read the interview and was impressed by the artist’s work. He invited Dony to pay a visit to Armagh, and within just two weeks, a model had been prepared and viewed, and a commission agreed. 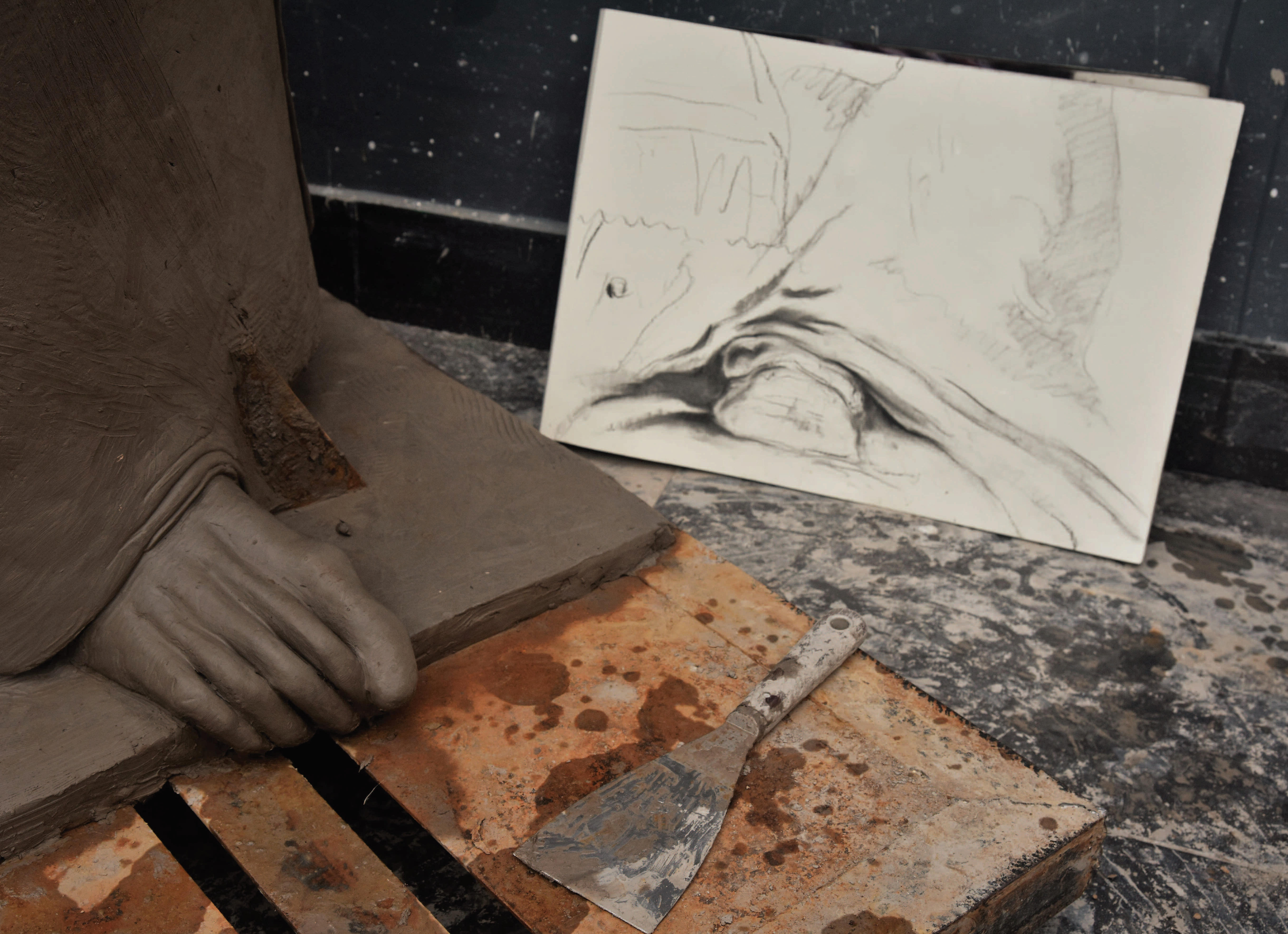 Toes grasping the edge of the plinth. Photo: The Editor

The clay sketch, or modello, was the first material step towards the full work of art. In it, the full design was anticipated and something of the overall impression was conveyed – the major gesture, the emotional aspect, and so on. The presentation modello was brought to Armagh so that it could be examined in the context of the space and perspective of the Cathedral.

The artist wanted the statue itself to be as big as possible, and the practical limit of seven feet in height, imposed by the door of his studio, works perfectly for the Cathedral in Armagh. When I visited Dony, the clay statue was at an advanced stage. He was refining details, and he was expecting the mould-makers to arrive in a matter of just a few days. Their job would be to translate the solid clay into a hollow wax, ready for the bronze.

Once the clay statue is finalized, the remaining work is, to a large extent, a technical feat rather than a simple continuation of the artist’s work. The artist leaves that part in the hands of the bronzing experts, though Dony explained that he has done bronzing work himself many times before, to the extent that he can envisage exactly what the clay statue will look like in bronze. When the bronze has been cast, the artist goes to the foundry for finishing touches and colouring (patina). Both tension and calm. Photo: The Editor 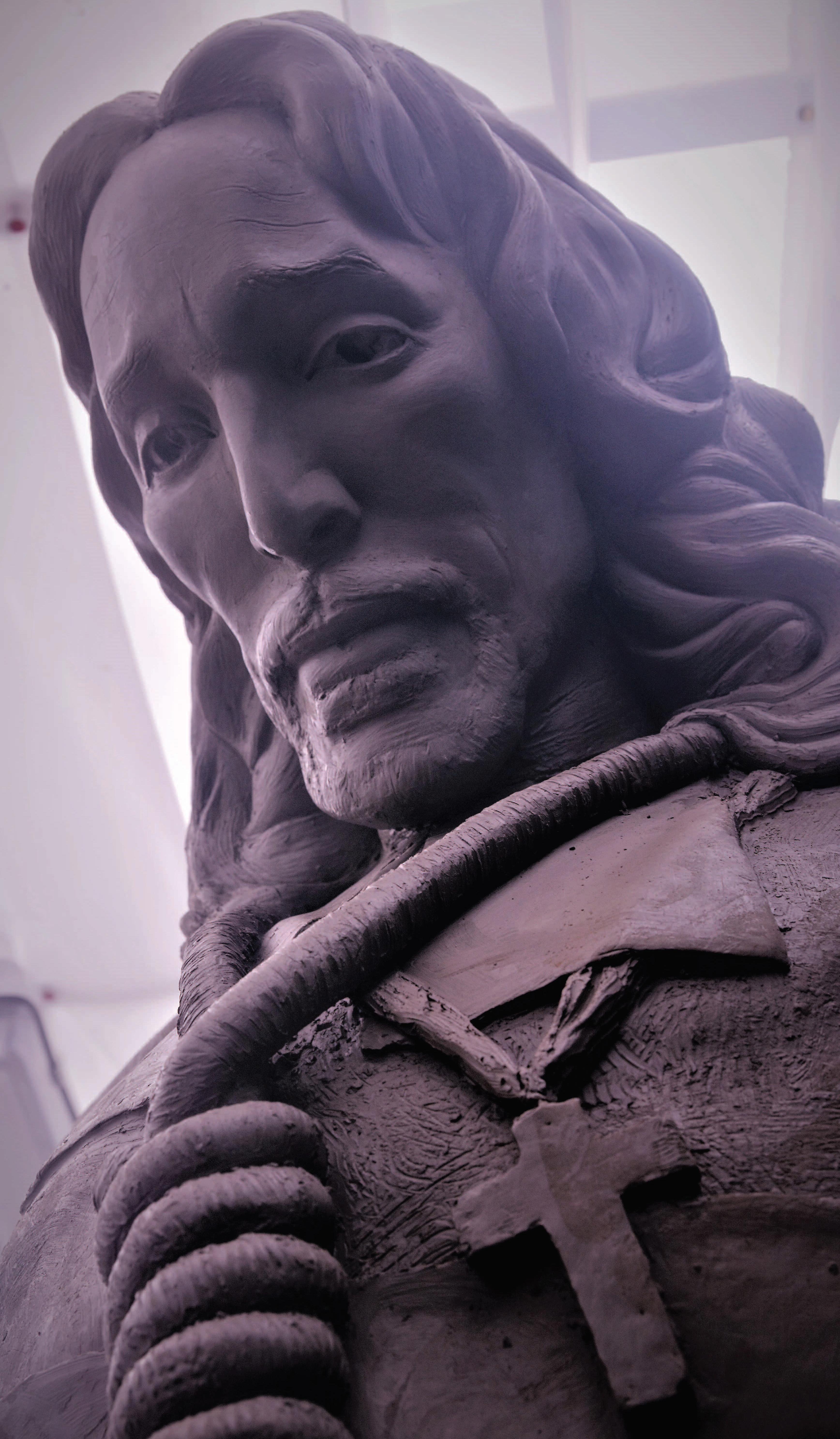 Dony was emphatic that in the making of the statue, he didn’t simply follow a master plan, implementing it step by step, but that there was more of an intuitive development. Taking up the lead, I asked him if Saint Oliver had been introducing himself to the artist as they went along. ‘It’s kind of a conversation,’ he replied, ‘I’m reading about the saint, I’m praying with his life – for half an hour in the morning and half an hour in the evening. The half hour of prayer before the work begins means that I’m praying with the subject and contemplating his life through the development of the image. The clay becomes a vehicle for the relationship with the saint, a language through which we communicate with each other. I understand him – he understands me, and that emerges from our conversation.

‘Art is essentially the overflow of the interior life of the artist. I have to develop a relationship with the saint as a subject, to the extent that it overflows into the work, and that overflow is what should touch the audience. I don’t expect people to pray in front of an image if I haven’t prayed in front of it. In order for liturgical or sacred art to feed a congregation, it has to come from deep prayer, just as a homily can affect a congregation only to the extent that it comes from the prayer of the priest. In each case, of course, the Holy Spirit plays a key part.’ 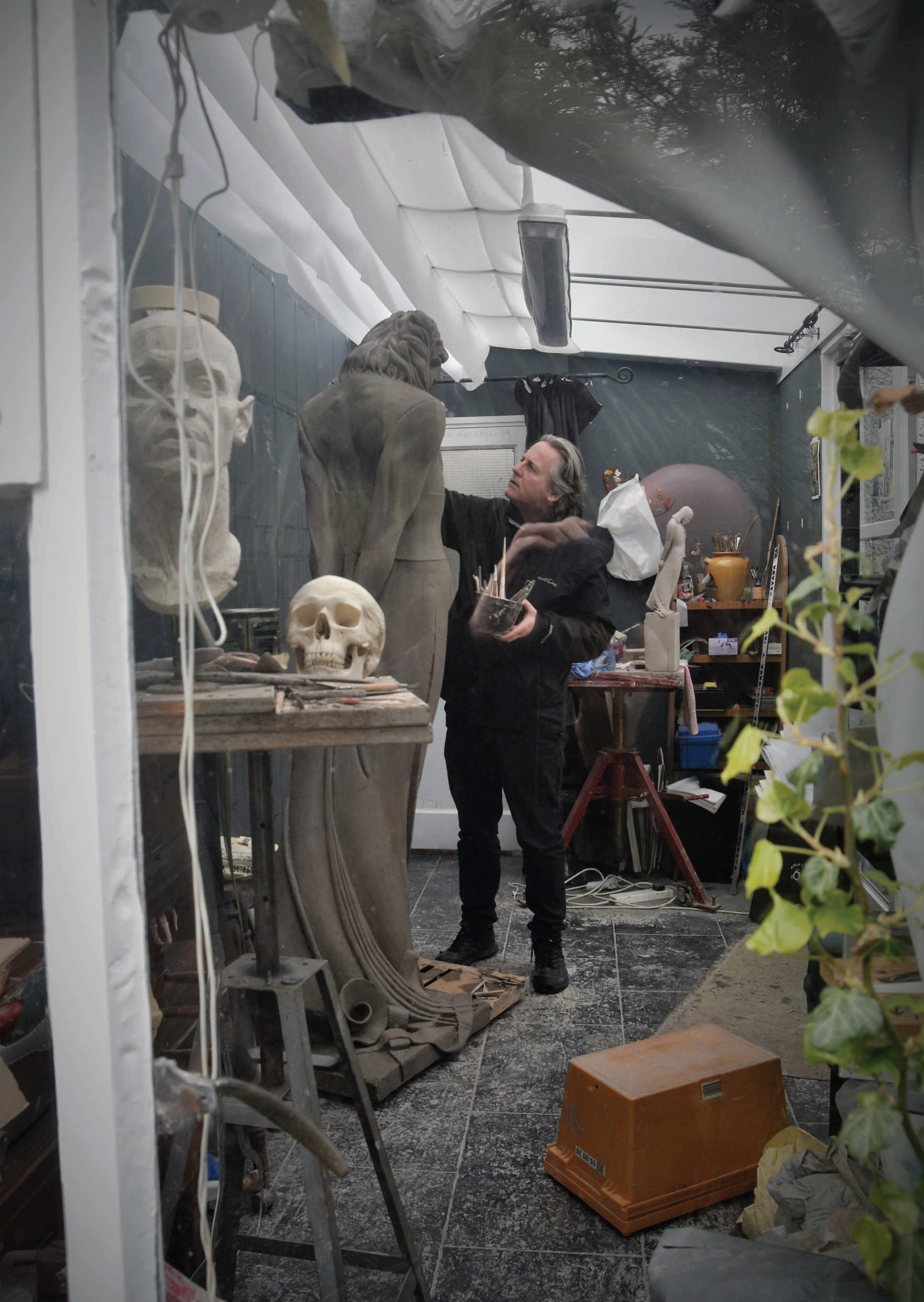 That artist’s studio. Photo: The Editor

Given that the artist felt the need to be ‘touched’ by the saint he was depicting, I asked Dony how he wanted the audience, in their turn, to be touched, and what he hoped the statue would do. His aim, he said, is ‘to break the heart of those who see the work, so that they are affected deeply in an emotional way.’ He added that the most beautiful compliment he ever received for his work was from someone who told him that it broke their heart: ‘Art is all about refining the emotions, so I want to affect people deeply, to break their heart. In the words of Joseph Ratzinger, beauty pierces the heart, and brings with it truth and goodness. This is really important, because people need the truth and goodness of St Oliver’s martyrdom, so that their lives can be touched and transformed. Most people come to faith, or come back to faith, not through the intellect but through the emotions. The Church has failed in recent times, by dropping the ball with regard to beauty.’

When I entered the studio, what struck me first was the juxtaposition of the noose and the pectoral cross on the chest of the figure. It looked as though they were being worn as one and the same item – which indeed they are, both being instruments of capital punishment. If anything, the Saint’s ‘pectoral noose’ seems to nudge the pectoral cross to one side. Oliver is following after Christ, but in his way, at his time, in his circumstances.

Equally striking was the deeply inward gaze of the saint. It reminded me of the serene, inward gaze of Mary, in Rublev’s icon of Our Lady of Tenderness. That said, however, St Oliver, as depicted in Dony’s statue, is on the point of stepping off his plinth: he is a man about to hang. He is flesh and blood, and his death is moments away, so there is tension in his face. Yet it’s not craven fear – this is a man with a mission!

Dony told me that he wanted to play with two distinct aspects. The front part of the statue is marked by tension, whereas the back is more about submission, yielding to the Holy Spirit. The saint’s hands, bound behind him, are entirely peaceful. They are gently clasping the martyr’s palm, which trails down to the archbishop’s pallium, making it clear that St Oliver’s martyrdom is connected with his episcopacy. That connection, which is made in a dramatically obvious way at the front of the statue by the noose and the pectoral cross, is made in a subtler way at the back of the statue, by the connection between pallium and palm.

The artist has been careful to capture an ecce homo pose, so that the saint is volunteering, offering himself. But just as we’ve seen in the tension in his facial muscles, he is not being spared a sense of dread at what is imminent: he is clasping the edge of the plinth with his toes – a spontaneous, involuntary reflex that heightens the drama. This is a man of courage and holiness – and of flesh and blood. Artist at work. Photo: The Editor

Did the significance of this commission, and the fact that it will be placed in the Cathedral in Armagh, pose any particular challenge? ‘Not really,’ the artist explains, ‘I don’t think all that much about the status of a commission. To me, it’s all about the piece, who the person is. To quote Joseph Ratzinger again, the two greatest witnesses to our faith are the saints, and the beauty the Church creates. To me, the most important is the saint, as that is the greatest work of art, since he or she is God’s own work, infinitely more beautiful than any sculpture. This is a very important message, because some people love to elevate art, to keep it at a certain distance. They need to realize that they are called to make their own life a masterpiece.’ The finer details. Photo: The Editor

It’s obvious, speaking to Dony MacManus, that he is very deeply invested in his art. I’m witnessing a work of personal spirituality, and I ask him if there is anything he finds particularly striking in the present work. The answer comes easily – most striking to the artist is the drama

of the piece: ‘I haven’t done anything this dramatic before; the whole tension of stepping to the edge of life – I’ve never before portrayed the actual moment of martyrdom. And especially because it’s going to be in a large space, the drama will be intensified. When you see a figure this size stepping off a plinth, in the sanctuary of a Cathedral, it’s pretty dramatic!’

And it’s all a labour, not just of finely-honed skill, but of love: ‘One of the things I love about creating art is that you’re p

articipating in the creative activity of God, and it’s an adventure – you just don’t know where it’s going. I would never have dreamed of anything like this, only that I was asked to do it. To me, commissions are really interesting, because you’re given parameters, and within those parameters, you get to be really creative. The commission is like a frame, and you paint within that frame.’

We chat a little about the contemporary frame: the present context of Irish Catholicism. As a church we may not quite be teetering at the edge of the plinth, but there are certainly challenges to be faced, and this is a dramatically timely work of art.