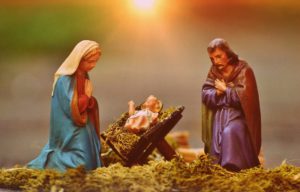 In his book, What is the Point of Being a Christian, English Dominican Timothy Radcliffe notes that many children today can more readily distinguish between a Triceratops and a Tyrannosaurus Rex than between an Aberdeen Angus and a Friesian. Fair enough – lots of children have never been near a farm, but have spent many hours looking at dinosaur movies or browsing dinosaur books. The striking thing Radcliffe points out, however, is the absence of the human person from the stories dinosaurs inhabit: we weren’t around for any of that prehistoric drama.

Many people who style themselves ‘humanists’ imagine that religion displaces humanity, that it ousts us from our rightful position at the centre of a grand, unfolding story. God, by that reckoning, is something of a dinosaur: as long as he is around, as long as he is given a place in the narrative, he hogs the story, leaving little or no room for humans. Just like the T-Rex and his fellow dinosaurs, God needs to exit the stage in order for us humans to flourish and to be authentic, creative players in the drama of history.

Christmas, of course, proclaims the very opposite. Far from exiting the stage of history so that humans can take their true place, it is God’s entrance into history that has fully revealed to us the truth about ourselves. The conviction that God took human form is the foundation of the very highest humanism, and by the same token, Christmas is our great, annual humanist celebration. At Christmas, God is true to the words spoken in the opening pages of the Bible, that human beings are created in the image and likeness of God. In the Incarnation, God affirms the goodness of our human nature in a new and radical way.

Familiarity with the annual celebration of Christmas makes it hard for us to appreciate how radically counter-cultural this feast is. The narrative that currently prevails insists that humanity will be the better for God’s disappearance from the stage of history, but year after year we celebrate his appearance. God must, we are told, be removed from the spheres of healthcare and education, yet we celebrate the birth of the great Healer and Teacher. We hear that faith, for those who aren’t yet enlightened enough to have sloughed it off, should be an entirely private affair, and still we give homage to the One who taught us to pray for the coming of a kingdom.

As disciples, let’s not be reluctant to own the term ‘humanist.’ There is more than ample historical precedent for linking it to Christian faith, and the Incarnation spells out the radically humanist attitude of God himself.

May the peace and the unrest of Christ be with you this Christmas.

Click here for a PDF of our Christmas editorial.